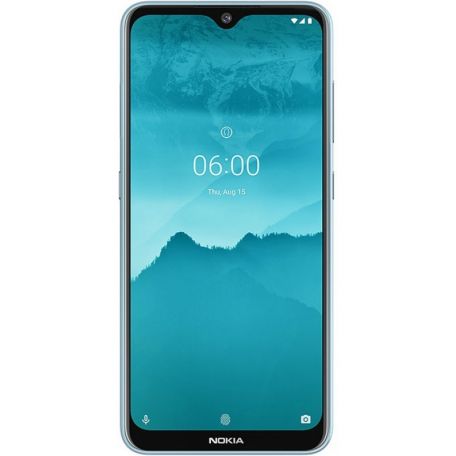 At 6.3 inches, the Nokia 6.2 almost has a screen size similar to its name. Even though the LCD panel of this screen is almost bezel-less, the fact that Nokia decided to brand its name at the base took up space which could have been shaved off.

Thanks to the adoption of a waterdrop style notch, though, we have about 83% screen to body ratio to contend with.
For a mid-range phone, it is expected that the Nokia 6.2 comes with a plastic frame, but we are pleased with the glass on the back of the device.

Besides that making the phone look even premium, it also ensures all the colours pop on this device. Speaking of colours, we have the Ceramic Black and Ice to choose from.

No matter what colour you go for, you still get the same cut-out for a triple camera and fingerprint sensor on the back. At the base of the Android Phone, you have the traditional 3.5mm jack, a USB Type C port and a speakerphone grille, as well as the mic port.

The sides of the Nokia 6.2 play house to the volume rocker buttons, as well as the power key. With that, we are just about done with what is on the surface for this unit.

Making up a rear triple camera setup is a main 16 megapixels snapper which is designated for wide-angle pictures.

An 8 megapixels sensor follows that, and this will is used for ultra-wide imaging. Paired with that is the final 5MP shooter for depth sensing. We believe that should help add bokeh effects and take portrait pictures better than anything else.

These rear cameras on the Nokia 6.2 comes with the added feature of taking panorama and HDR shots, among other things. Likewise, they bring the LED flash with them to better capturing in low light.

Unfortunately, we don’t have the same LED flash treatment on the 8MP selfie camera upfront. We also think this sensor might be too small, but that is what we get.

Hardware, Software and Other Features

It would have been poor to have anything other than the Android 9 Pie here, so we are glad that is just what the Nokia 6.2 offers us.

Based on the Android One program, this unit will get updates as soon as they are rolled out – as well as function without all the bloatware known to come with phones today.

Besides that, we have a Qualcomm SD 636 chipset paired with the Adreno 509 graphics card under the hood. Both chips will leverage the power of either a 3GB or 4GB RAM to work, depending on which one the user goes for.

Storage on the Nokia 6.2 will be based on the RAM of the model too – the 3GB RAM model gets only 32GB of space, while you can have as much as 128GB on the 4GB RAM model.

That should not be a huge deciding factor since there is a dedicated microSD card slot which accepts up to 512GB external storage.

To cap it all off, there is a 3500 mAh battery in the Nokia 6.2. Just like we have on the higher Nokia 7.2, this one will also charge at a 10W capacity. In other words, users should expect any fast charging capabilities with this unit at all.