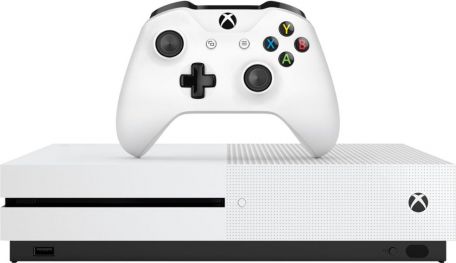 Be the first to review this product
SKU
Microsoft Xbox One S 1TB Star Wars Jedi
In stock
₦170,000.00
Add to Wish List Add to Compare

Own the Xbox One S Star Wars Jedi: Fallen Order™ Deluxe Edition bundle and experience the thrill and challenge of becoming a Jedi. Step into the role of a Jedi Padawan who narrowly escaped the purge of Order 66. Engage in innovative lightsaber and Force combat on a galaxy-spanning adventure as you stay one step ahead of the Empire and its deadly Inquisitors. Continue your training, explore the mysteries of the Force and become the Jedi you were meant to be. This bundle includes an Xbox One S, an Xbox Wireless Controller, a full-game download of Star Wars Jedi: Fallen Order™ Deluxe Edition, a 1-Month Xbox Live Gold subscription, a 1-Month Xbox Game Pass for Console trial, and 1-Month of EA Access.* Whether you’re playing games, watching 4K movies, or streaming gameplay, there's never been a better time to game with Xbox One.

Become a Jedi on Xbox One S

Step into the role of a Jedi Padawan who narrowly escaped the purge of Order 66. Engage in cinematically-charged lightsaber and Force combat on a galaxy-spanning adventure as you stay one step ahead of the Empire and its deadly Inquisitors.

The best value in games and entertainment

Whether you’re watching 4K movies, or streaming gameplay, there’s never been a better time to game with Xbox One.

The only console designed to play the best games of the past, present, and future

Play over 2,200 games including more than 200 exclusives and over 600 classics from Xbox 360 and Original Xbox. (Games sold separately.)

Play together with friends and discover your next favorite game. Immerse yourself in a deep library of more than 100 high-quality games. Join the greatest community of gamers on the most advanced multiplayer network. (Membership sold separately.)

Connect and play with friends and family on Xbox Live

The most advanced multiplayer network provides steady gameplay and fast downloads. Experience hundreds of legendary games from all Xbox consoles with backward compatibility.

Enjoy the freedom of Xbox Play Anywhere games on both Xbox One and Windows 10 PC at no additional cost. The Xbox One accessories you’ve got now (or have got your eye on) work with Xbox One S.* No hassle. Just play.

Xbox Play Anywhere: Only available with digital versions of games. PC hardware requirements may vary for games on Windows 10.